These are the most common values, additional TCR’s, nominal resistances, and accuracy’s are widely available.

An additional consideration in the designation of RTD parameters is the lead configuration. Four possibilities exist:

In the two-wire configuration, lead wire resistance can’t be accounted for. This design is employed when accuracy is of less importance than other mechanical and/or electrical design parameters. Note, using an element with a high nominal resistance can minimize accuracy problems.

The most common configuration for industrial RTD’s is the three-wire. Lead wire resistance is compensated for by the addition of a third leg. Accuracy is dependent on the matched resistance of the lead wires, errors induced by this configuration normally amount to less than 0.05°C.

In the four-wire configuration, lead wire resistance is compensated for by the addition of third and fourth legs. Accuracy is no longer dependent on the matched resistances of the lead wires. This configuration also has better immunity to noise, thermoelectric effects, and contact resistance problems.

An uncommon variation of the three-wire configuration, with similar performance, except uses a separate circuit for the compensating loop.

Tolerance classifications and data for RTD elements are available for platinum RTD’s only. The two most frequently specified classes defined by the industry standard IEC-751 (for platinum RTD’s with a temperature coefficient of resistance of 0.00385Ω/Ω/°C) are “Class A” and “Class B”. The tolerances in °C are calculated as follows: 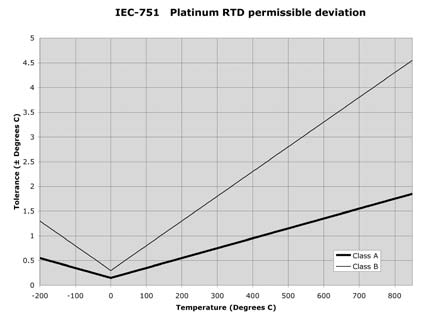 Select from products below to configure RTDs 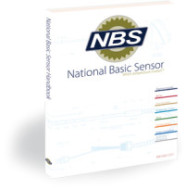